How many fillet welds do you specify on any given job?  Are you confident that you have a complete and thorough understanding of the intent behind the code provisions as they apply to the maximum size fillet weld allowed?  The use of fillet welds can get so repetitive and instinctive that we often specify them without thought to determining whether their design thickness aligns with the intent of the code provisions.

In the February 2017 SEU Core Session, Duane Miller, PE, from The Lincoln Electric Company, presented Welding Myths that Structural Engineers Need to Know About.  Duane covered a variety of topics that are often misunderstood by structural engineers regarding the design and detail of welded connections.  As he pointed out, many of these myths have some roots in truth, but some are only partly true or can be completely false.

It is true that in AISC 360-10 Section J2.2b states that “The maximum size of fillet welds of connected parts shall be: (a) Along edges of material less than ¼” (6mm) thick; not greater than the thickness of the material, (b) Along edges of material ¼” (6mm) or more in thickness; not greater than the thickness of the material minus 1/16” (2mm), unless the weld is especially designated on the drawings to be built out to obtain full-throat thickness.  In the as-welded condition, the distance between the edge of the base metal, and the toe of the weld is permitted to be less than 1/16 in. (2mm) provided the weld size is clearly verifiable.”  However, Duane explained the intent of the code provision and the history behind this mandate.

In the past, it became apparent that some welders were creating subpar welds when the weld was placed at a lap joint.  The welder was able to melt away the corner portion of the steel and create a weld that visually looked to be the correct size, but actually did not have the necessary required throat thickness.  To address this situation, the Code was modified to require that the maximum weld thickness be 1/16” less than the thickness of the steel, to prevent these subpar welds from occurring.  This provision specifically applies to only those circumstances where the weld occurs at the edge.

Duane gave an example where this provision does NOT apply, such as in the case of a tee joint connection as shown on the slide below.  In this instance, the engineer can design the fillet weld to any size needed, since the weld does not occur at the edge of the steel, but rather on the surface of the steel.  This illustrates a great reminder that we, as engineers, should always keep in mind the intent of the code provisions, and avoid reflexive designs from habit rather than solid understanding. 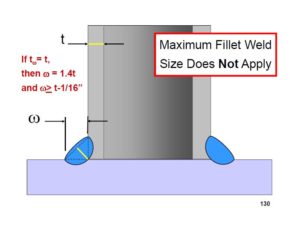