Are you aware of the cost implications of various connection types used with HSS columns?  Engineers often use repeated connection details from job to job, without fully understanding the added costs of using those details TYPICAL ALL WF BEAM TO HSS COLUMN.  These hidden costs typically leave engineers wondering why HSS seems more expensive than wide flange sections, however, when detailed appropriately, HSS can be used without driving up the cost of the project.

In the July 2020 SE University session, Kim Olson, PE, from Steel Tube Institute, presented What Your Fabricator Wishes You Knew About HSS.  Kim clarified which HSS column shear and moment connections are most economical and reviewed the information required for cost efficient delegated HSS truss connection design.  She also explained tips for discerning availability of HSS shapes in the US and identified the aspects of AESS pertinent to HSS. 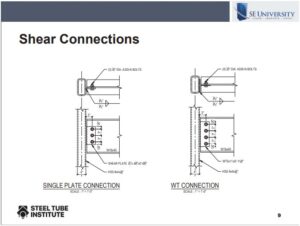 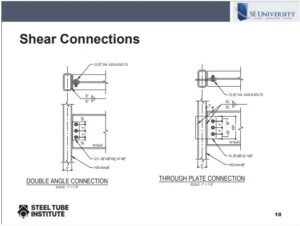 Kim provided guidance on which connections are most economical when using HSS shapes.  While the EOR may or may not be responsible for the connection design on a given project, knowing which connection types will work with the column sizes selected can save money for the client by allowing less costly shear or moment connections.  As you can see below, Kim has shown typical shear connections beginning with the least costly and ending with the most costly. 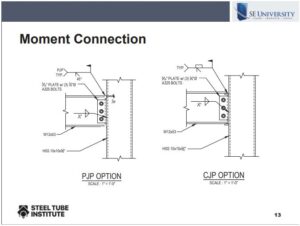 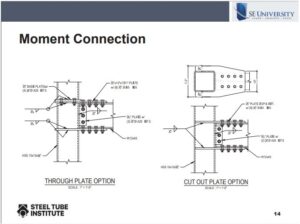 Kim also shared some studies done by STI regarding the relative costs of moment connections to HSS columns.  The connections shown below are not prequalified seismic connections and are designed to have about the same capacity.

These are fairly common moment connection details for HSS columns, and Kim was able to have these connections priced out by a variety of fabricators from all over the country in order to compare the relative costs of the fabrication of the connections plus the material costs which vary for each detail.  As you can see below, the PJP welded connection was the most economical, being the simplest and most straightforward to fabricate.  At the other end of the spectrum, the through plate connection being the stiffest of the four also prices out the highest.  Kim noted that although the CJP welded connection was less than the through plate connection, one cost that was not considered in the analysis was the owner-incurred costs to have the CJP weld inspected during construction.  The cut out plate option offers a good compromise of cost for additional stiffness. 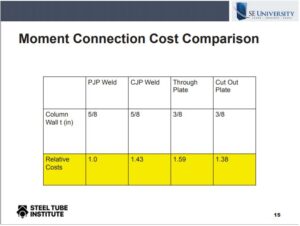 Although HSS is often perceived to be more expensive, engineers should be aware that the goal with HSS is not always to reduce the total weight of steel in order to control material costs.  Proper detailing of connections and being aware of the impact thin walled column sizes may have on the connection selected can help to reduce the fabrication (and total) costs on jobs using HSS members.